SENSEX NIFTY WILL NEVER CRASH LIKE JAPAN'S NIKKEI. Here's why

Their biggest question to me is "What if BSE Sensex /Nifty is in Bubble like Japan's Nikkei was in 1989”?

No...it has NOT given any bonus nor seen a split!!!

Those who say invest for a period of 20 years and you will never lose money.... show them this! 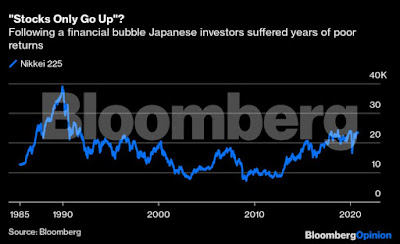 The highs touched in 1989 was touched even after 3 full decades !!

So, has Japan NOT grown in the last 32 years?

Of course, it has!

What if the Indian BSE Sensex and Nifty too see a similar fate?

In an extremely high BULL market like the current one, the above question will NOT COME UP EVEN IN A DREAM because we indeed are in a DREAM BULL RUN and it’s not looking like stopping soon.

Before answering the question of whether the Indian Sensex and Nifty could see the same fate as Nikkei or not, let’s find why Japan's Nikkei NEVER RECOVERED to its old glory

Japan's population is aging, workforce shrinking, and hence they are forced to SAVE rather than spend.

We all know that for an economy to grow and grow fast, SPENDING is what is required and to the BIG question,

Latest data shows that more than 1/4th (26.16%) population in India are aged LESS than 14 years which means huge working-class and obviously HUGE SPENDING

India is expected to have 70 crores of young consumers (more than the combined population of Brazil, Germany, Russia, and Germany) by 2030. 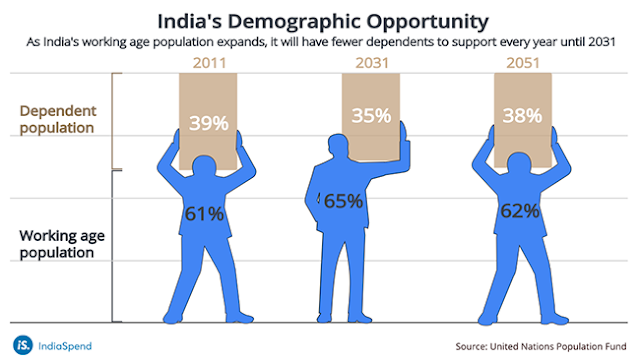 The young population means young investors who are also more likely to be ready to increase exposure to risky assets and stock markets will be a huge beneficiary of this.

The period prior to 1989 (when Nikkei hit ALL-TIME HIGH) Japan saw unparalleled prosperity and boom for nearly a decade.

Nikkei was that expensive!

India is yet to see this kind of prosperity and boom. India is all set to see these kind of glory years which means we are yet to see a REAL BOOM In Indian Stock Markets

Indeed, we are all lucky to be in this kind of GLORIOUS TIMES and we SHOULD make maximum use of this to create unparalleled wealth by staying in Equities and growth assets (and definitely not Gold or bonds, except as a part of Asset Allocation)

It’s like Indian Rupee going from the present 73 levels to sub 32 levels!!

Even today the Japanese Yen is around 109 levels. Still a long way to go

Indian Rupee has been weak to steady and rarely strong and moving like the Yen is certainly out of question. 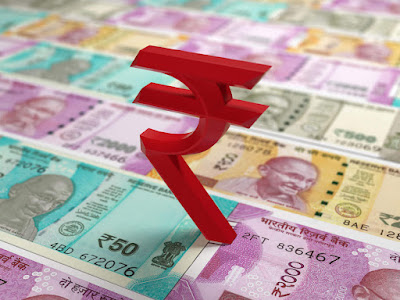 Moreover, the RBI and the Govt of India have been proactive in this matter making sure that our Exports stay competitive and in turn have been doing a phenomenal
job in keeping the Indian Rupee Steady

Moderate inflation is the BEST scenario

RBI in India has been doing an awesome job when it comes to controlling inflation and also ensuring a conducive atmosphere for GROWTH.

The Bank of Japan sharply raised Inter-Bank lending rates in late 1989. This was done to deflate speculation and keep inflation in check.

An huge huge jump of more than 140% which obviously led to heavy repurcussions.

This caught many bulls off guard who rushed to cover their positions, and this created a cycle to SELL as more and more people got trapped.

Yet again, we have to truly appreciate our Central Bank, the RBI for its amazing work in making sure that the rates are range bound and are rarely volatile. The pumping of money and the soft interest rate all show how good RBI has been in keeping rates in control.

Japan's economy is not only aging but also shrinking.

In fact, Japan's economy shrank at the FASTEST rate in 2019 as it was hit by sales tax rise, a typhoon, weak demand and of course due to shrinking workforce.

Japanese consumer market is getting smaller day by day. 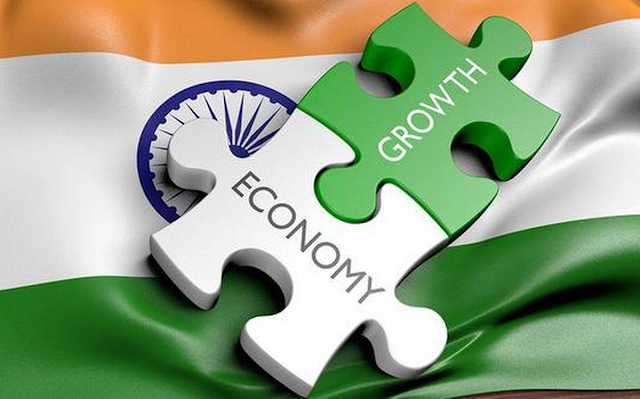 As I said earlier, India’s young population is our biggest strength. The Young workforce will ensure that the economy is moving at a fast clip. The proactive moves by the Central Government also is keeping the economy in growth mode. Lot of moves like the GST, Start-Up India has ensured that Indian economy is on a good road

But just in case if the Sensex/Nifty does give NEXT TO NOTHING returns for the next 10-15 years, what's the solution to our Wealth Creation?

All said and done, the humble sip is the David who can take on the mighty Goliath.

As I have pointed in my book DONT RETIRE RICH...there have been many mutual funds (Ex: ICICI Technology Fund) whose NAV from Rs.10 nosedived to Rs.2 and SIP investors were already sitting in profit at NAV Rs.8.

They did not even need the Nav to touch Rs.10!

That's the power of Monthly SIP 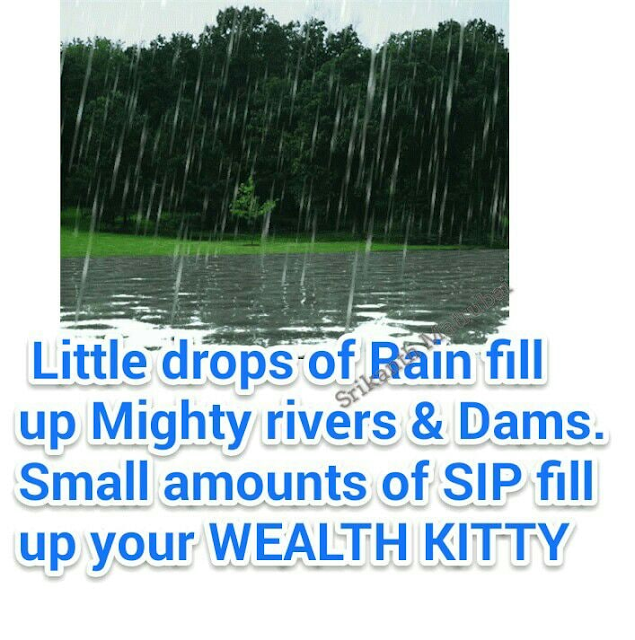 While Asset allocation may look foolish in these Bullish times, the fact remains that Asset Allocation is one of the most effective to book profits at high rates and reenters at lower levels.

Time and again this has been proved multiple times.

For example, a 50-50 allocation automatically ensures you sell at high rates and purchase at low rates

If you are investing in stocks directly, it would be prudent to reinvest the Dividends that you receive.

Not only will the wealth compound faster but also you will be buying at different time intervals. 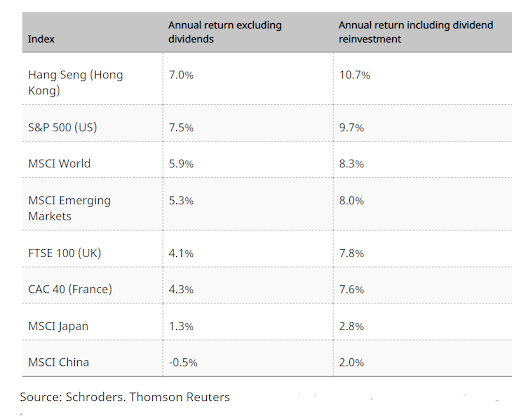 But with dividend reinvestment, the return shot up by nearly 6 times to a decent respectable 119.3%

That's the power of Reinvestment.

DIVERSIFY YOUR GEOGRAPHY TOO :

Yes. India is in bullish mode

Yes. India is on the threshold of Super-Fast Growth

But it would be hugely prudent to diversify your investment across the Geography to avoid over-dependence on 1 country and also to benefit from other Growth Economies.

Yes... there will be sharp corrections in between. It’s inevitable. Whether it's stock markets, real estate, and even Bond rates, corrections are inevitable and unavoidable.

Never get worried about people's reactions (or the Market falls) when you have invested in good STRONG fundamental stocks/funds.

Likewise, you need to understand your MFD's choice of investments may go through pain for a brief period.

But history has proved innumerable times that

The LONG TERM does not matter if you don’t survive the short term.

So... never convert your Temporary Paper Loss into Permanent Loss by selling off Blue Chips.

All the indices be it the Nikkei 225, BSE Sensex, the NSE Nifty does not include dividend returns which are quite decent.

In spite of this addition, the Nikkei is still not back to its old high levels.

This makes it very clear that if you feel that Indian The economy will do well, the Indian companies will do better, and, in that case, the Stock Markets too will do better

The biggest growth driver for India is the rapid shift from Unorganised to ORganised.

And for your portfolio to do MORE THAN BETTER, the best an option would be to give your corpus to a competent Fund Manager who is bound to be much more knowledgeable with more resources and research at his beckoning to generate much higher returns than a layman investor

And most importantly, remember, EQUITY IS THE BEST ASSET CLASS for your Wealth creation 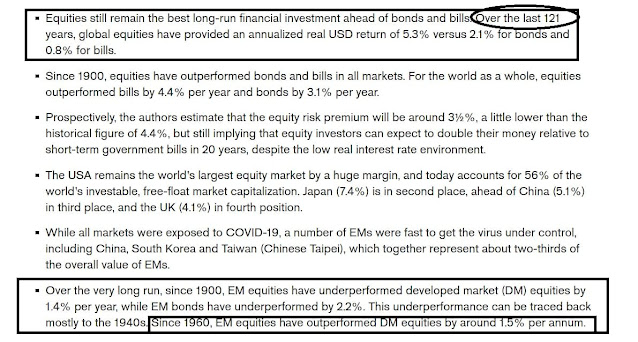 See the above graph.

And when it comes to investment and wealth creation, you should be

d) Have no Biases

e) Have an expert to guide you

A Guide will instill discipline into your investment strategy and identify right assets for your financial goals. 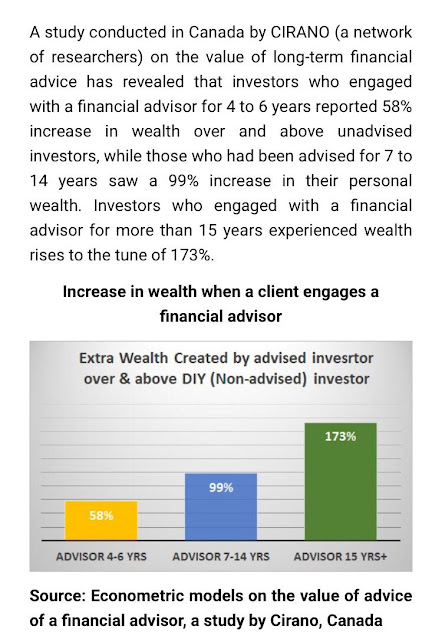 We wish that you do not just become a mere crorepati but upgrade to become a Drudpati. 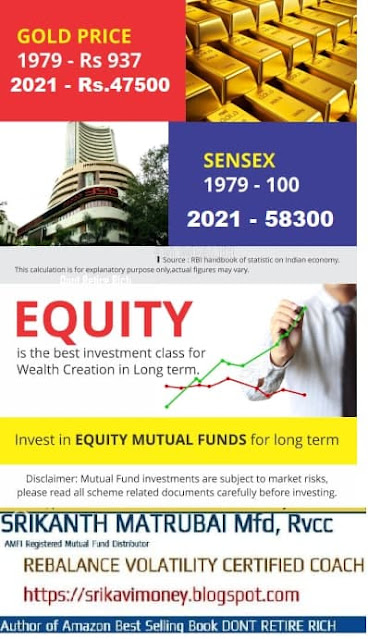 Some of my articles shared during those times

You are strongly encouraged to consult your financial planner before making any decision regarding this investment. The views expressed here are the author's personal views and should not be interpreted as a recommendation to invest/avoid.
Srikanth Matrubai Author of the Amazon Best Seller DON'T RETIRE RICH
Do read the book and give your valuable feedback and request you to post positive comments on Amazon. https://amzn.to/3cHUM6M/
You can purchase the book on Amazon and Flipkart
For the best of ideas on where to invest to create Mountains of Wealth
join my TELEGRAM channel
WEALTH ARCHITECT
https://t.me/joinchat/AAAAAELl4KUnaJzi-JJlDg/
at September 13, 2021

Is your money DYING ? 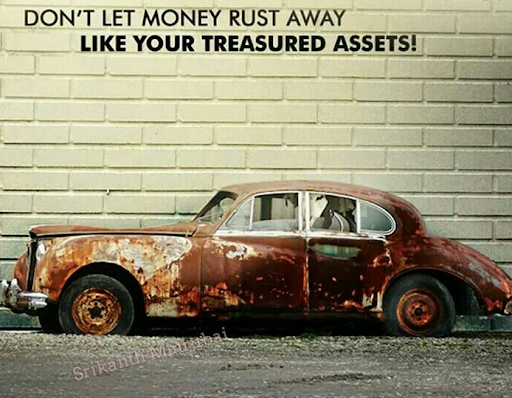 The MOST Loved book on How NOT TO RETIRE RICH! 4.8 out of 5 stars Order your copy NOW !

PRACTICAL TIP TO SAVE EFFECTIVELY

now at 50% discount MRP - 499 now offer price only Rs.249 GET IT TODAY 3 Classic books 3 bestsellers that have inspired people all over the world, and are sure to transform you and change your life: how to Win Friends & influence People, the power of your Subconscious mind, and think & grow Rich.

9 Steps to Transforming Your Relationship with Money and Achieving Financial Independence: