Every freedom fighter had only 1 goal in mind; INDEPENDENCE

We too should have only 1 goal in life FINANCIAL INDEPENDENCE

Not the goal to be richer than my cousin

Not the goal to have bigger than my neighbour.

Identify the GOAL which you actually need and give you the PURPOSE in life and then work backward.

Every single freedom fighter had the goal of Independence from the British. Each used different methods to achieve the same but the goal was one and the same was achieved. 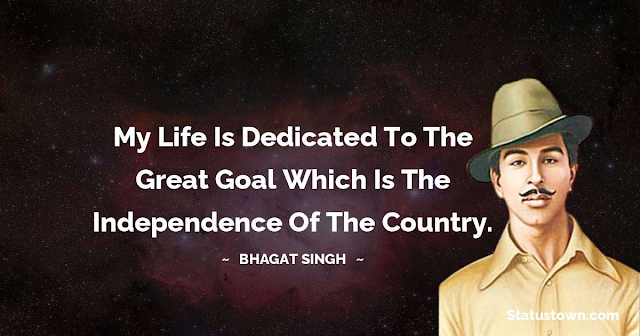 And how do you achieve your goal of Financial Independence?
Firstly, identify a goal and have it measured.

Measurable Goals help you plan better, focus sharper, and are

easier to achieve especially its breakable into small chunks.

2. DO NOT DEVIATE FROM YOUR GOAL

All Freedom fighters faced lots of failures. Many were jailed. Many saw their close associates killed in front of their eyes.
But the brave freedom fighters be it, Mahatma Gandhi or Bal Gangadhar Tilak wasn’t afraid to continue to struggle and stick to their goal. Many times it felt like they were fighting a losing battle. But their determination and perseverance did bring huge results to them by way of Indian Independence.

Do not get lured by instant gratification like the alluring discount sale on Flipkart, etc 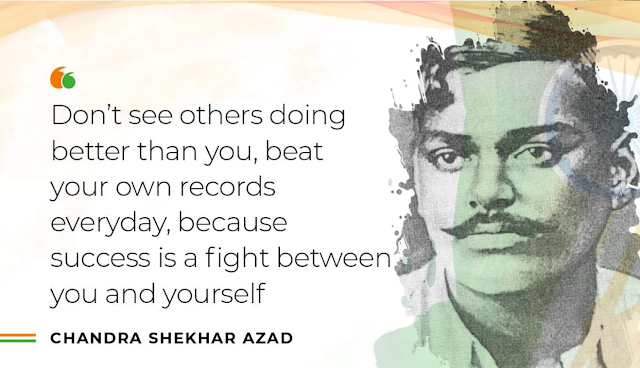 Do not get diverted by others people's beliefs. They have their own reasons to stick to it. You stick to your belief. Remember, each individual needs, and goals are different and need a distinct portfolio and that’s why it's called PERSONAL Finance.

Do not panic about short-term temporary falls. Markets have always bounced back and risen stronger each time.

Focus on your Goal and STICK TO IT.

Yes, stock market returns are never linear and will test your patience every now and then, and sometimes, you are bound to start questioning your route.

But stick to your goal.

What you need to achieve your goals is not just investment but discipline. The discipline of STICKING TO YOUR INVESTMENT PLAN under all circumstances.

Yes… People (your elders, friends, relatives) may laugh at you for ignoring Real Estate and going into Equities for Wealth Creation.

But remember ultimately it will be YOU WILL HAVE THE LAST LAUGH.
The one who laughs last lasts.

Bhagat Singh said "People get accustomed to the established order of things and tremble at the idea of change. ´

Bhagat Singh was of the opinion that non-violence was less effective and felt that teaching a lesson to the British in their own way. And even though Bhagat was martyred, he did achieve the goal of striking fear in the British that Indians can be bold and can take up arms too.

If you are building a house and a nail breaks, do you stop building or do you change the nail? — Rwandan proverb

The old order was to put whatever was saved in FD, Gold, and if possible, in Real Estate.

But we have seen how these asset classes have failed to beat even inflation (and if taxes are added, they have given negative returns)
Equities, though volatile, have been the best asset classes amongst the ones to which we have access and you need to embrace the same so that you can achieve Financial Independence

Accepting new order does not embrace everything new.

I have seen many of my friends and relatives losing big in Crypto.  With no understanding of the risk, they invested and mocked my "conservative" style of sticking to equities. But I ruthlessly stuck to what I understood.

The best is to be humble and know what you do not understand and avoid till u understand.

There were many instances where the Freedom Warriors a.k.a. Freedom Fighters were lured/pressurised away from their goals.

In fact, many a battle British without a drop of blood by luring traitors.

But Mahatma Gandhi, Netaji Bose, and Sardar Patel were lured by any of the bait nor did they fall to the fear of death by hanging by the British. 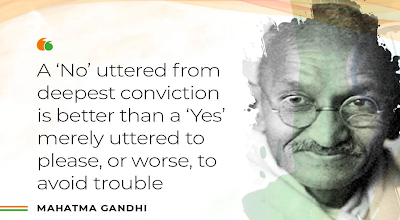 They stuck to their principles and were bold enough to say “NO”.

Many times we have seen how a relative/neighbour/ friend who was doing nothing suddenly becomes a Financial Expert once they become an Agent.

And they lure you into Exotic products with all accompanying fancy brochures. And vast majority are obliged to fall into the trap of financial ruin by buying those products which otherwise they would have NEVER EVEN CONSIDERED.
BE BOLD. BE READY TO SAY “NO”. After all, it's YOUR hard-earned money.
If you are in deep financial trouble, will these people come and help you? No? Then why get into obligation and fall into a pit?
Avoid them like a plague and be bold and say “NO” !!!

A vast majority also fall into a financial trap when a friend/relative asks for a LOAN.

Read this article on how to say NO when a friend/relative asks for a loan.

FAILING TO PLAN LEADS TO FAILURE OF PLAN

The 1857 Sepoy Mutiny caught the British unawares and they struggled to contain the mutiny. But the mutiny failed because it was not coordinated, not organised, and not planned.

Likewise, if you just jump into investments without planning it could result in a disaster.
Have a Goal, have a budget, get your Risk Profiling done, and through proper Asset Allocation INVEST

When you build a bridge, you insist that it can carry 50000 kgs weight, but you only drive 15000 kgs weight truck across it.

That is the way you want your bridges to be.

And that same principle works with your retirement planning. We have to make sure that your fund lasts as many years as it can.

When Mahatma Gandhi started, he faced the issue of language as he was fluent only in Gujarati, Hindi, and English but still he managed to communicate with the entire population of India where the majority understood none of these languages.

The simplicity of his communication, and the clarity through which he shared won over the whole of India.

Most importantly he didn’t try to convince the whole country. He started with small and then gradually scaled up.

He singlehandedly was able to hold the huge British Empire to ransom.

He did not WAIT to learn languages or to find translators of those languages. He started with fu

ll faith and this confidence helped the Mahatma get the confidence of one and all.

You too can start small. And most importantly DO NOT POSTPONE your investment to some other day.

Likewise, the seemingly small SIP is definitely capable of taking you on the highway of Wealth Creation by helping you achieve all your Financial Goals.

You don’t need BIG Money to start your journey to become a Drudpati
(#Drudpati is Rs.10 crores just like Crorepati is Rs.1 crore and Arabpati is Rs.100 crores)

Start with a monthly sip as low as Rs.1000 and then gradually scale up.

"If you keep postponing your savings until you are 45, you will have to save 3 times MORE per year than what you could have started saving at 25"

Compounding is magical when you use it and poisonous when you avoid it. Starting saving 20 years early allows you to save only 1/3 of what you NEED to save now. So, start TODAY.  Start small, but START

The 2nd World War drained away a lot of energy, and finances from the British and it started getting weak and losing focus across the World.
Revolutionaries like Bhagat Singh used this opportunity to create fear in the British and Netaji Bose went 1 step further.

Netaji Bose not only talked tough but went ahead and actually formed the Indian National Army which shook the British empire.

He even had the courage, and guts to collaborate with Hitler an enemy’s enemy is our friend philosophy).

which literally had the British shivering.

This made the British realise that their time in India was up and they better quit India with some respect left or get ready to be kicked out.

Likewise, in stock markets, we do get opportunities like the

Fall during the March 2020 Covid scare

Fall during the Feb 2022 Ukraine War

CORRECTIONS ARE TEMPORARY. GROWTH IS PERMANENT

All corrections test our patience & most importantly give us an opportunity to buy at tantalizing prices. Make maximum use of this

And when we look back, we realise every single fall has been a great opportunity to accumulate NAVs at lower rates, and those who did take the plunge came out richer and neared their Financial Freedom.

I, Srikanth Matrubai, do hereby declare that 29th February 2028, will be my FINDEPENDENCE DAY 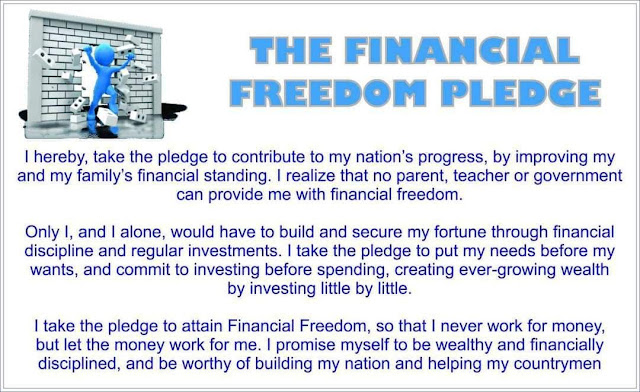 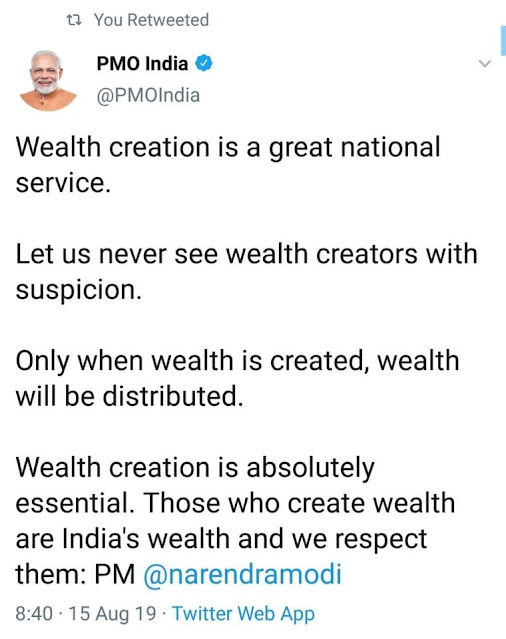 Have been doing a lot of seminars, and talks to MFDs across various forums and across cities But when it comes to actual investors, the spri...

PRACTICAL TIP TO SAVE EFFECTIVELY